The film left me terrified as a child, the book was nonetheless enjoyable. Welcome to the Fly on the 4th Wall where we shall review one of the 'classic' science fiction books:
Starship Troopers - Robert A. Heinlein 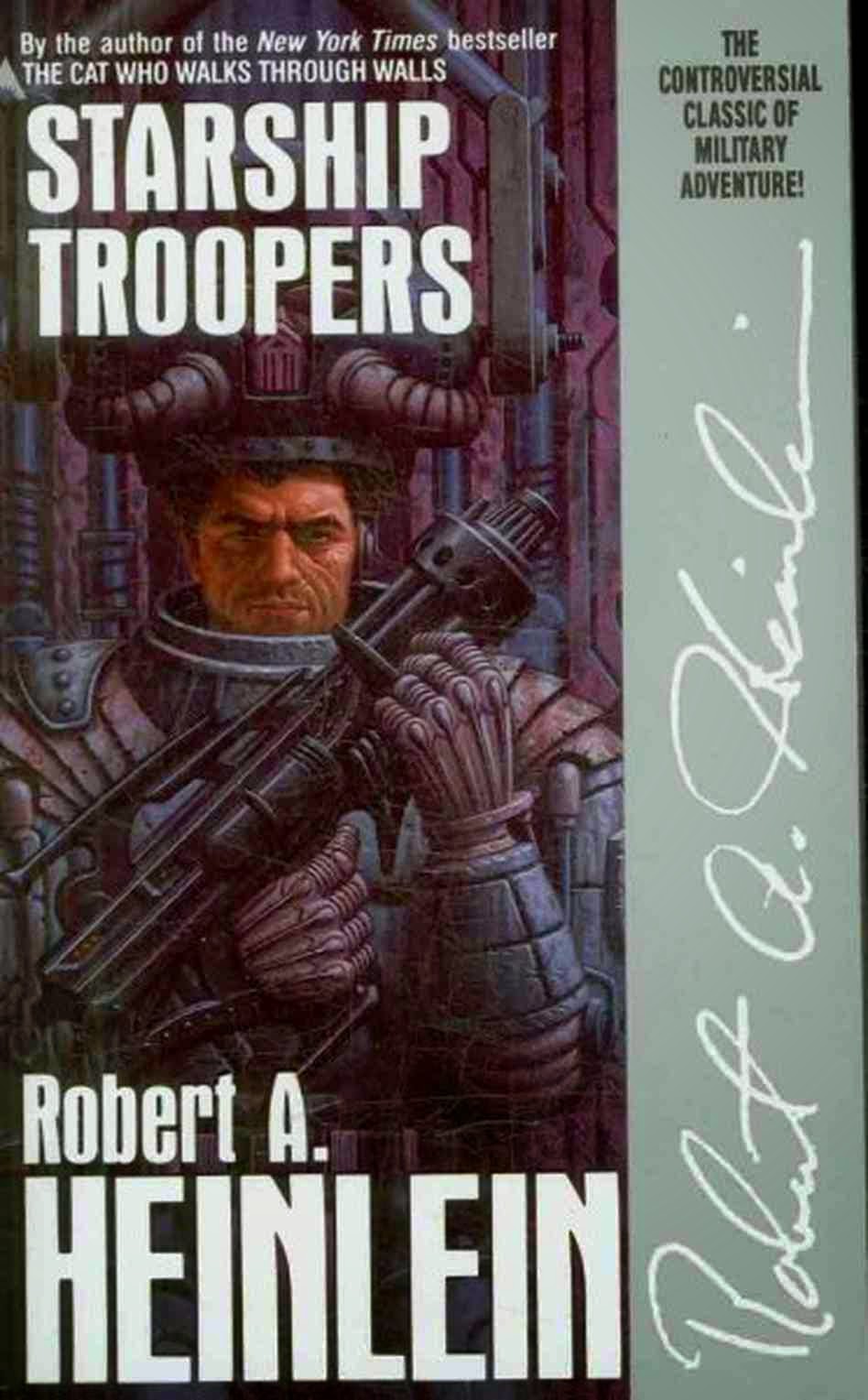 Synopsis:
"Join the army and see the universe! In one of Robert Heinlein's most controversial bestsellers, a recruit of the future goes through the toughest boot camp in the Universe - and into battle with the Terran Mobile Infantry against mankind's most alarming enemy!" - Starship Troopers, Robert A. Heinlein [1959]

The story follows Juan Rico (or "Johnnie") through his career within the Terran Mobile Infantry from a fresh faced recruit to the veteran and officer he later becomes. His career is set against mankind's struggle with the dangerous 'Pseudo-Arachnids', a race of insectile aliens. Alien here is for once the right word, since the Pseudo-Arachnids (or "bugs") have a completely non-human existence. This does make them hard to empathise with, but the narrative tells the story only from Rico's perspective so it isn't long before the bug becomes 'the enemy' to the reader. The story is told strictly in a 'flashback' method, frequently revealing exposition of the world, society and Rico's own life, through events in his life.

Rico lives in what would be considered a dystopian future. His world is a society where the ruling party are formed solely of "Sky Marshals" (the highest rank of the armed forces which combines the disciplines of both the Infantry and Navy). The novel mentions that to be a citizen of this future every man or woman must complete a term of service in the armed forces.
It lends itself to an almost Roman society. The Roman Empire was famous for granting land and citizenship to those who were not born Roman citizens but had undergone terms of service within the Roman army.
However, non-citizens of the Federation do benefit from a number of rights (such as freedom of speech and political assembly), but only citizens ('veterans') were entitled to vote and hold public office.

The start of the book opens with Rico about to enter his first combat drop as a non-commissioned officer of the Terran Mobile Infantry aboard the Rodger Young, a corvette. He is part of Rasczak's Roughnecks, a platoon formerly headed by Lieutenant Rasczak, who is revealed to have died by this point. Rico's drop will pit him against the 'skinnies,' a race of humanoids who happen to be allied with the Pseudo-Arachnids. The platoon makes a brief and successful sortie with only a single casualty, a Dizzy Flores (who died during their retrieval).

The story then flashes back to Rico graduating high school and his decision to do Federal Service (i.e. to sign up and earn his citizenship). However, his father, a wealthy businessman objects and disowns him. This is the only section of the novel that reveals details of Rico's civilian life. He and two friends sign up, undergo physical tests before being separated. Rico ends up in the Terran Mobile Infantry.

From there, the story focuses on Rico's experiences of Camp Arthur Currie where he begins his career as a recruit. He encounters a particularly rough drill sergeant in the form of "Sergeant Zim" who turns him and the other civilian recruits into something more closely resembling soldiers. During Rico's stint in the camp a couple of notable events occur. There is the flogging of a man who struck his superior officer during a 'Freeze' training exercise and his bad conduct discharge (and this is revealed to be a blessing as the true sentence would normally have been death). Rico himself is given five lashes for negligence in a simulated exercise involving nuclear weapons that would have caused the death of one of his squad mates, while a deserter was hanged for the death of a little girl. During Rico's time in training, the world outside changes from 'peace' to a state of emergency and by the time he has graduated from the training programme, war has begun.

Despite allusions to prior police actions and border skirmishes, the 'war' is only really begun after the destruction of Buenos Aires by the Pseudo-Arachnids. It is later revealed that Rico's mother was there on holiday during the attack. Following mankind's disastrous counter-attack on Klendathu, the novel falls into detailing the routines involved in military life and Rico's relationships with his senior officers and non-commissioned officers, the war having reverted to raids similar to the one at the start of the book.

After some time, Rico decides to become a career soldier and later applies and is accepted into Officer Candidate School (on the advice of his fellows in the Roughnecks). En route to the school Sergeant Rico (as he is now) meets his father, now Corporal Rico who had volunteered following the death of Rico's mother. Despite being separated for so long the two reconcile but go their different ways.

Rico eventually is commissioned as a third lieutenant (pending final approval by his commanding officer, a Captain Blackstone) and takes part in Operation Royalty. Operation Royalty is a large scale operation designed to capture 'Brain Bugs' and/or 'Queens', the ruling castes of the Pseudo-Arachnid society. The Operation was a success though it cost Rico a great number of his men, the third lieutenant feeling he had mismanaged the men assigned to him (and therefore failed them). However, Captain Blackstone feels he had done a good job and Rico is promoted to 2nd Lieutenant.

The book ends showing Rico aboard the Rodger Young once again, serving as Captain Rico of Rico's Roughnecks as he prepares for a combat drop on Klendathu with his father, now senior NCO (non-commissioned officer).

Food for thought:
Starship Troopers is a book that skirts around fascism through most of the story. Certain topics in schools can only be taught by citizens for example (this meaning 'military veterans').
Heinlein is considered to channel much of his own personality and opinions through Dubois (Rico's teacher) and expounds heavily on the concept of violence as a necessary part of mankind's existence, though this is nothing too surprising as this was written in the 1960s, when war with the Soviet Union was a very real threat. The idea of channeling aggressive impulses into sacrifice for 'good' ideals is not entirely shocking in this respect. "The tree of liberty must be refreshed from time to time with the blood of patriots and tyrants." - Thomas Jefferson

However, the film (called the same name) attempted to satirise the underlying fascism in the book's setting through an overly obvious link to the Nazi Party. Officers in the film wore black leather trenchcoats (of the sort commonly associated with the Nazi SS), Rico and the recruits swearing the oath of allegiance wore SA uniforms (Sturmabteilung), a vaguely eagle shaped motif was selected as the Federation's logo (to represent the twin-headed eagle) and the film was cast as if it were a propaganda film with the frequent allusions to the Federation's control of broadcasting.

This does raise my final food for thought. In the film, we see the Arachnids as monsters. Giant insects who rather messily disassemble people in various ways. But perhaps that is the point of the film (and in some respects the book too). By portraying an enemy repulsive and impossible to empathise with, we the reader (and audience of the film) are drawn into supporting the 'good guys' who are the product of a fascist state.
An argument could be made that it is easy for people to support fascist principles and see it as 'good' provided we are convinced the other, the alien, is not something to be understood but an enemy to be destroyed.

And yet... we know they can be understood. The Pseudo-Arachnid was an ally of the Skinnies after all.