Welcome to the Fly on the Fourth Wall. This week's book is an interesting tale of dystopia on Earth.
It's Compile Quest by Ronel van Tonder. 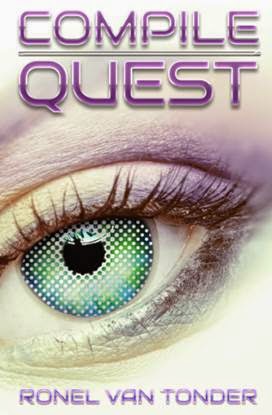 'In the year 2036, solar storms batter Earth crippling electrical infrastructures across the globe. Night falls and the ensuing pandemonium claims millions of lives, catapulting the world into chaos.

In the midst of this global turmoil a hero emerges. The altruistic SUN Council intercedes, constructing enormous domes on each continent to protect the world’s population from the radioactive CME’s of the incessant solar storms.

But not everyone makes it to the domes. In an attempt to survive the deadly radiation, hundreds of thousands of people dig into the earth, living in squalor under an oppressive military dictatorship.

Now centuries later, the final stage of the SUN Council’s plan to decimate the world’s population approaches. But as victory glimmers on the horizon, two women from discordant halves of this new world start to unravel the conspiracy.' Compile:Quest - Ronel van Tonder [2014]

Compile Quest is a story that revolves around two women and a male, Jinx, Peppermint and Ray respectively, who live lives that are so far apart they may as well be anathema to each other. Their story is set in a post-apocalyptic Earth, ravaged by solar flares and centres around South Africa. Switching back and forth between the two, the reader is gradually brought into the world of the SUN Council's domes. Peppermint is a survivor of the disaster that struck the Earth and lucky enough to be a resident of the Africa Dome, enjoying a life of luxury such as our world has never seen. She has a soft life and lives out of touch of the reality of her situation, only coming to realise that her world is highly regimented when she is personally impacted by the Africa Dome's policies. Jinx is a soldier of the Rooivalk Digger Colony which occasionally struggles with the Wildebeest Colony while Ray is a farmer and later recruit for the Wildebeest Digger Colony. Their lives seem far apart (though Ray and Jinx are perhaps closer together than they both are to Peppermint) but they are intrinsically linked.

A couple of things caught my eye with this story and I had a mix of reactions towards it. My first delight was the technology present in the book. The SUN Council has gone well out of its way to develop a closed world that is kept content and placid. We see this throughout Peppermint's experiences as she lives (without quite realising it until later) under the thumb of the SUN Council's requirement. At her disposal is a level of technology that brings about a level of hedonism unheard of in today's world. Peppermint's world features robots and virtual reality, recreational drugs and wild parties (and polygamous relationships). The word robot derives from robota which itself derives from a word referring to a form of slavery or forced labour. In this bright new world, mankind appears to enjoy a hedonistic lifestyle on account of the SUN Council's magnanimous organisation of their upkeep. Even clothes are provided from dispensers called weDress (which is probably a subtle dig at the Apple I-

The book also details the SUN Council as a form of benevolent corporate entity (if we assume benevolent to mean protective and constrictive). Provided a dome citizen follow the SUN Council's mandatory requirements, then that citizen is provided with a luxurious lifestyle. I've talked about this issue before, how society and our environment controls how we interact with the world around us. Currently, it is harder and harder to avoid a homogenous culture thanks to the Internet, but in the world of the Africa Dome, it is all too easy to dictate how every citizen should think and behave. Every citizen must wear a Cerberus Unit that effectively monitors them and must receive regular check ups to determine their physical and mental health (here referring to their compatibility with acceptance of their situation). In a closed society without external influence then, it is too easy to see how one can be controlled. However, people within that closed society would be unable to recognise their situation, seeing it more as 'the way things are.' It is simply impossible to shed those subjective influences on our views (i.e. true bias is impossible). The SUN Council presents a warning to the reader, reminding us that we choose to limit our choice of information sources at our own peril.

Outside of this, I have only a few observations to add. Some of which might be interesting to note. Events that impact our individual culture's history tend to lend great weight to how we create our villains. For example, Harry Potter's Deatheaters are influenced by the Nazi SS Deathheads (same motif, similar goals of racial purity, a fascination in their innate superiority as the world's master race, rule by fear and violence). In much the same way, I would theorize (can't be proven, too few sources to back it up), that a South African book might be influenced by the Soweto (South Western Townships) that edge around Johannesburg, much like the parallels drawn in real life by the Soweto and the city of Jo-burg proper, Compile Quest highlights the differences between the rich and poor, those who live in Domes and those who live in Colonies. Ray's viewpoint provides the greatest comparison between the struggle for life that every day in the Wildebeest Digger Colony requires compared to Peppermint's near idyll lifestyle. The natural tensions caused by friction between have and have-nots is a very powerful thing and in the world described by Compile Quest, it would be enhanced by the sheer size of the contrast between the rich and poor. The Domes of Compile Quest are probably analogous with the compounds that formed in South Africa.

I was quite endeared to the use of Afrikaans in the book (despite having no actual knowledge of the language at all). I found that the dialogue and interactions are written well enough that it is easy to parse meaning when Afrikaans is being spoken. There are admittedly some issues with the terminology used by the Africa Dome denizens (whose language has quite understandibly evolved to reflect their high-tech society), I think that was well thought out (though I disagree with the idea that 'data' should be an epithet as data is neither a positive nor negative term on its own).

Overall though, I believe this book to be an enjoyable read. It gives some interesting insights, it has a fantastic setting and is young (but not in the young-adult sense). I look forward to seeing what else van Tonder decides to put to pen.

Thank you and have a sunny day.
Posted by Unknown at 19:32