This week's science fiction book takes place deep underground in a world with little hope. Actually, in all honesty, the book's world has no hope. It is a story of the dying struggles of mankind as it turns slowly away from the world above and spins its own myths and legends in the world below.
It's Metro 2033 by Dmitry Glukhovsky. 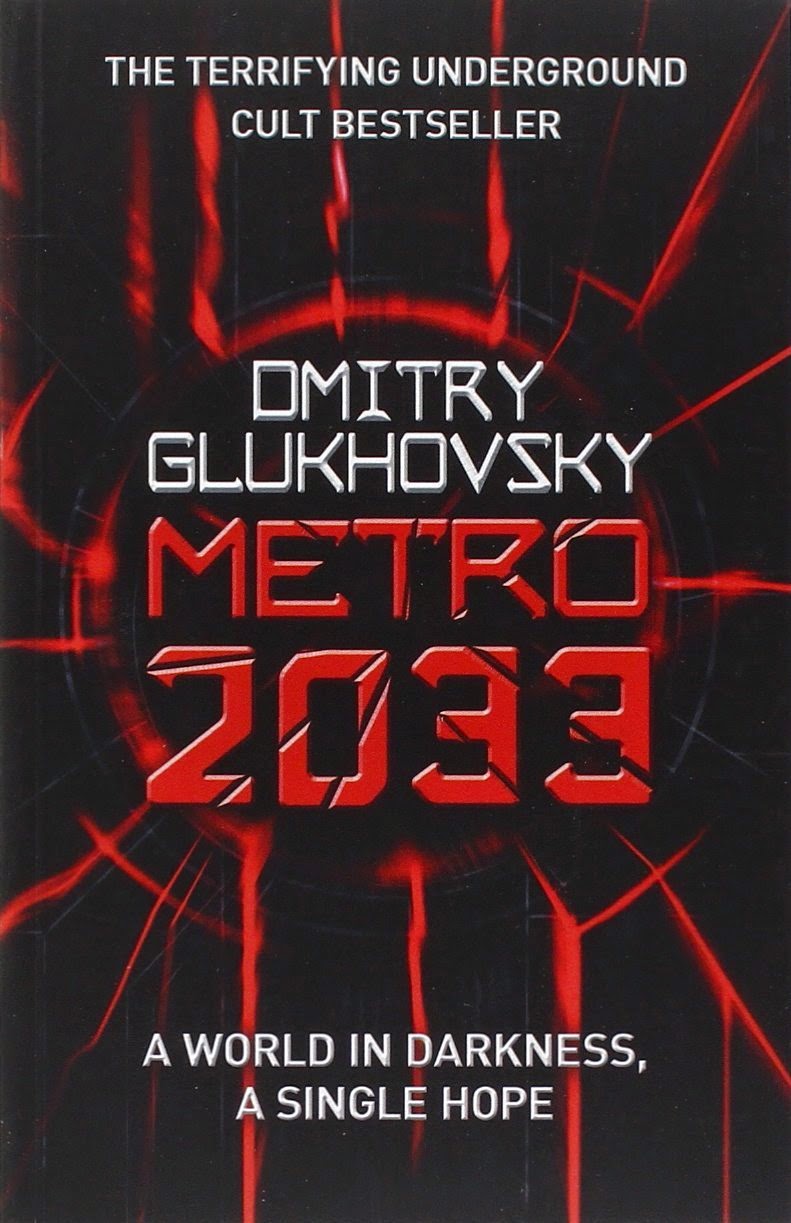 'The year is 2033. The world has been reduced to rubble. Humanity is nearly extinct. A few thousand live on, not knowing if they are the only survivors on the planet.
They live in the Moscow Metro - the biggest air-raid shelter ever build. It is humanity's last refuge. It is a world without a tomorrow, with no room for dreams, plans, hopes. Feelings have given way to instinct - the most important of which is survival. Survival at any price.

VDNKh is the nothernmost inhabited station on its line and still remains secure. But now a new and terrible threat has appeared. Artyom, a young man living in VDNKh, is given the task of penetrating to the heart of the Metro, to the legendary Polis, to alert everyone to the awful danger and to get help. He holds the future of his native station in his hands, the future of the Metro - and maybe the whole of humanity.' Metro 2033 - Dmitry Glukhovsky [2007], Translation - Natasha Randall [2009]

Metro 2033 is set in a world of dingy darkness. The world has been ravaged by nuclear war (during a Cold War that had not remained cold but had ended up getting rather hot). The surface is an uninhabitable wasteland that belongs to the mutated creatures that now thrive in the light of the radioactive cities. Artyom is a young man whose home station is under terrible threat. He is directed by a Stalker called Hunter (Stalker is the title of near-mythic heroes who run salvage missions on the surface) to tell the heart of the metro, Polis, of the threat that faces VDNKh. This threat, coming from the next station along, the abandoned botanical gardens, is a threat that might bring ruin to the entire metro.

The story is episodic in style, each station and each step of the journey is almost an entirely separate world from the previous. Artyom's travels allow him to realise that his station is not some far-flung outpost that protects the metro alone, but merely one of many struggling for survival and within the metro itself, stations vie with each other over resources, ideology and creed.

The Moscow Metro is a classic tourist destination for visitors to Moscow thanks to the beautiful architecture within the stations, however, Metro 2033 turns away from its beauty and presents a world alone and in the dark. Mankind has become so used to the flare of emergency lighting that they are blinded by the light of the sun. Stalkers only dare operate at night.

This is not the story of a bright future, or of mankind banding together to face the threat of the ruined world. This is not the story of progressive mankind. This is the story of man's descent into smaller and smaller communities as they turn their back on the world they had once known and embrace the darkness below with their own myths and legends. Such is the darkness of the world that each station lives in that these myths and legends have taken life as facts.


Frankly, this is a lovely setting. Not entirely original (though in this day and age that's a hard mantle to assume). It is a bleak tale certainly, and a bleaker setting, but this story nevertheless conjures some fantastic differences between stations and there is great detail in the world setting throughout the book in the form of the people Artyom meets and the stories they share.
However, that does lead directly to the first problem. The setting of Metro 2033 is strongly developed but mostly told to the reader by characters, rather than shown (which is always the more subtle and more interesting way to develop 'lore' around a setting). The other issue is that, despite this deep and dark (pun intended on the Metro there) setting, there is actually very little drama for Artyom. His story is less about his journey through the metro and becomes more a vehicle for the author to use to display the metro. It is only near the last quarter (or so) of the book that Artyom's tale rises to the forefront, but the majority of the book revolves more around the various stations that Artyom finds himself at.

In its own way, the author has written charicatures of ideologies and creeds in each of Artyom's encounters, one dimensional belief systems that control stations. Artyom meets with Communist stations that war with the fascist Fourth Reich, he is captured by cannibals, talks with traders of the capitalist Hansa and listens to stories from born-again Christians, Trotskyists and more. Sadly, each of these examples are rendered without much depth which results in the feeling that Metro 2033's universe is deep and intriguing but without much impact.

On the interesting side, the author frequently visits the concept of humanity and what exactly that means in this dark age. The world is grim, highlighted by small realities (the currency for example is ammunition, to have weapons and bullets is to have both physical power and spending capability). The threat to VDNKh and the rest of the metro is not at all physical but psychological. There is little humour in this book to relieve the reader of the story's tone.

However, in the midst of all this, we are treated to Artyom's education of the world he inhabits. Raised in one of the metro's far-flung outposts he is the equivalent of an unworldly, untravelled person. He is essentially himself an innocent to the metro, though this is true in its own way of each station's inhabitants. There are endless myths that Artyom cannot separate from fact because his world differs so vastly from ours. There is no ability to merely 'check' the truth, no ability to merely be sceptical as the world is dark enough to believe near anything. As an example, Artyom is told that there is a station that takes people and forces them to dig downwards. The station is run by satanists who believe that the metro and life there is merely just a layer of hell itself and that to connect the metro with the hell that ran deeper would be to bring about the end of days. He is told rumours about the Kremlin, that he should never look too closely at it, for should the light catch those domes he might be drawn in like a moth to the flames. He even encounters a society of luddites who worship a 'Great Worm' that they attribute as the creator of the metro's tunnels, arguing that mankind had arrived after it had passed to build in its wake. There's no real way that Artyom can prove or disprove anything he is told and it boils down to a simple fact for the young man. He is free to choose how he should think on his world. The world of metro is shaped mostly by belief and almost regressive 'caveman-like' behaviour of wild stories around campfires, though Artyom does not ever commit to any one of the beliefs around him.

In our world it is easy to scoff at say, the satanists for example, but in Artyom's world, a world were strange beasts roam the surface and stranger creatures threaten the metro, a world where some stations are so badly affected by horrific creations of science and a by-gone war that the tunnels must be collapsed, it would be hard to tell where truth ended and fiction started. There are stories of the souls of the dead caught in the pipes of the metro, strange anomalies that incite fear and terror, rumours of a Soviet missile base still functioning.

It is ironic that despite the setting and the slow pace of the narrative that we are treated to fairly blunt intimations that Artyom possesses an unique destiny with even Artyom himself coming to believe that he has an allotted path, and should he continue on it he would remain unharmed. It is rare that the character of a book acknowledges his own plot-given right to survive no matter the odds.

In summary, the book has an interesting setting but fails to deliver a plot to match with it. Artyom's tale results in the feeling that even Artyom is merely along for the ride as he is taken from station to station and shown the glory (and horror) of the metro world.
Posted by Unknown at 21:04